‘Yama’ in Japan and England

“After watching [Yama], it made me recall my childhood days from when my grandmother told me folk tales. Japan is so different now. This show made me connect to my roots and remember traditional Japan. We have forgotten these true Japanese things that used to be common in ordinary peoples’ lives.”
– An audience member in the Tokyo post-show discussion.

Doubtful Sound worked closely with the Poet, Hiroshi Hatakeyama to turn the folk-tales he had collected during the 1960s and 70s from the Shonai area of Japan into the theatrical production, Yama – Tales of Shonai. The show was performed at two Yamagata venues; the 750 year-old Gyokusenji temple, and Honma museum in Sakata. Both have beautiful traditional gardens which provided the perfect backdrop for the show.

When Mr Hatakeyama originally collected these stories, he wanted to have a written account of the folk tales of Shonai. Many people in modern Japan have no knowledge of these ancient tales, and he was worried that they would disappear. We were careful to make sure that we stayed true to the nature of the tales, and we, too, have tried to stick to that ethos.

It was wonderful to be able to share the history, music and culture of the Shonai area of Tohoku with the local people and since then Doubtful Sound has performed bilingual versions of Yama at Tiny Alice Theatre in Tokyo and The Kings Head Theatre in London (collaborating with the amazing SOAS Minyo Group).

The stories we perform from Shonai no Minwa vary from show to show, and can include any of the following: The Liar of Yamagata; The Floating Coffin; The Salmon Wife; The Three Men who went to Hell; and The Seven Foxes and the Man with the Tumour on his Cheek; The Cat; Nuka and Kome; The Brothers; The Woman and the Mother-in-law; The Stone-shaved Monk; The Woman who wouldn’t Eat; The Old Man who Swallowed a Bird; The Man who Turned into an Oni; The Mischievous Acts of Jizo; and The Mackerel Monger. 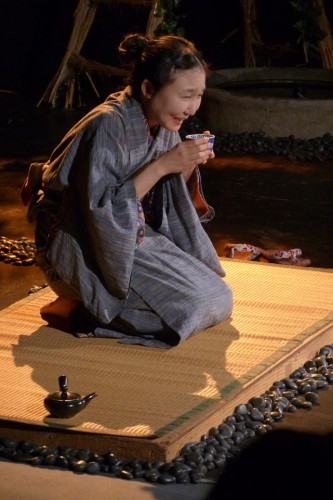